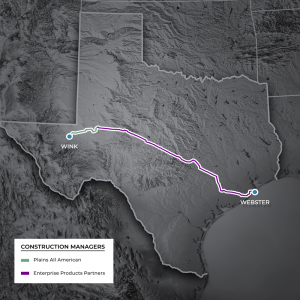 The Permian Basin is one of the world’s most prolific oil basins and accounts for more than half of the U.S. expected oil production growth. The region has energized the U.S. economy and helps secure the country’s energy independence. For Americans, this can mean lower gas prices, increased U.S. manufacturing growth and new job opportunities.

The growth potential from the Permian is significant, but production exceeds pipeline capacity to transport crude oil out of the region.

To ease this bottleneck, Wink to Webster Pipeline LLC (Wink to Webster), a joint venture among affiliates of ExxonMobil; Plains All American Pipeline, L.P.; MPLX LP; Delek US; Lotus Midstream, LLC; and Rattler Midstream LP, is building a pipeline system to transport more than 1 million barrels of crude oil and condensate per day from the Permian Basin to the Texas Gulf Coast. The 650-mile pipeline system will have origin points in Wink and Midland, Texas; multiple destinations in the Houston market, including Webster and Baytown; and connections to Texas City and Beaumont. Priority will be placed on utilizing existing pipeline corridors and advanced construction techniques to help limit community and environmental impacts.

Although not participating in the joint venture, an affiliate of Enterprise Products Partners L.P. has invested in the pipeline project and will serve as construction manager for the Midland-to-Webster segment of the Wink to Webster pipeline system. Plains will serve as the construction manager of the Wink-to-Midland segment, and ExxonMobil Pipeline Company will operate the system on behalf of the joint venture.

According to research conducted by Texas Tech University, construction of the project is expected to directly generate 3,100 well-paying construction jobs and to indirectly support 21,400 additional jobs in related industries.

Committed to designing, constructing, operating and maintaining the pipeline system in a safe and reliable manner

Learn more about the Wink to Webster Pipeline system.